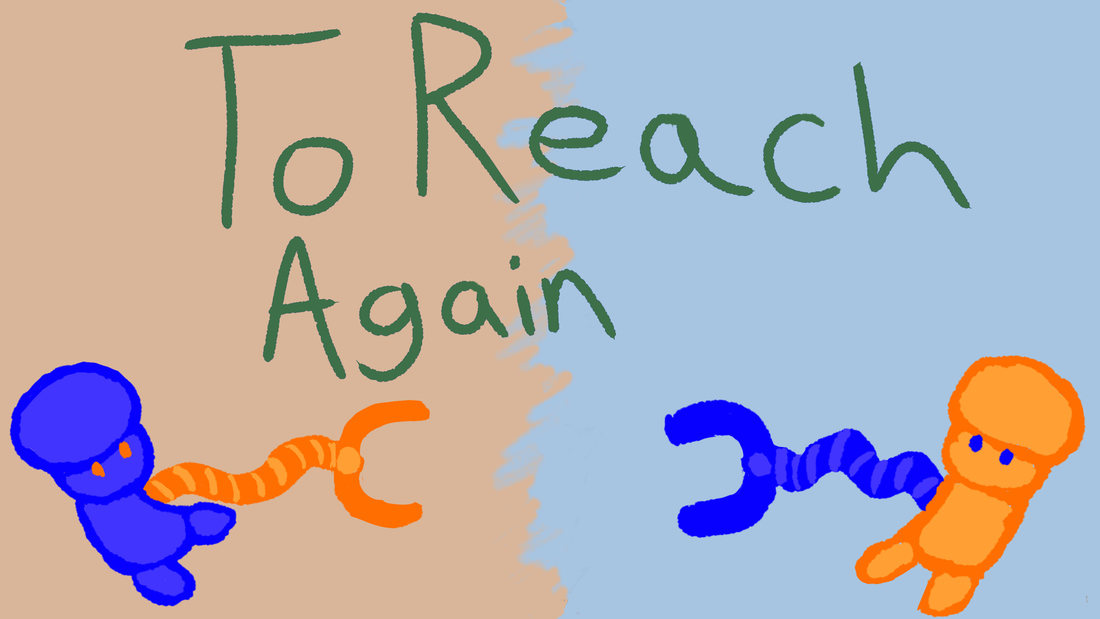 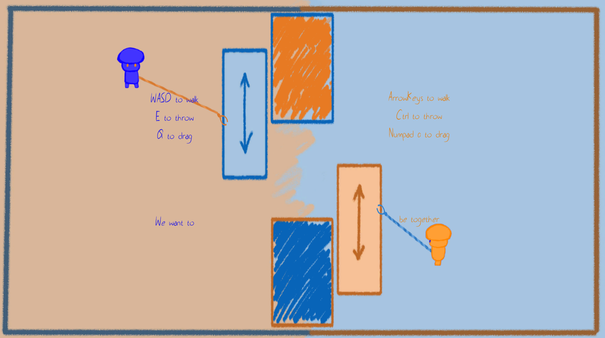 To reach again was created in 5 days by a team of 4 for the extra credits game jam #4.
The jam ran from 5pm on 5/30/2019 to 9pm on 6/3/2019
The theme of the jam was: CONNECT
Bonus challenges:
- Create a game that two or more people can play in the same room
- Create a game using only two colors for its palette
- Release the code of the game to be publicly accessible
- Create a game that illustrates or makes use of the Kuleshov effect
- Use an asset from a product you have released previously whether or not that asset was used in the final product.

This was my first game jam and I have never cut a product so close. In such a small amount of time you really cannot waste a second lest your game be clearly incomplete or barely resemble a game. I finally got to work on a finished project with my friend Nick like we have been meaning to for years, though the rapid development made it pretty hectic.

It was practically a fluke that we had the team we did. A few minutes after the jam began I was putting contacts in my phone and accidentally called Alex Riak who did the music for my last project. I casually mentioned the jam and he said he wanted to participate. In a similar way I messaged Josh, one of the artists from the same project and within 30 minutes our team had doubled! It would have been smarter to ask much farther in advance but the extra members were not initially intended. Thankfully they were involved as the art and music took the project to a whole new level. Nick and I are primarily designers and programmers so having the added diversity made for a far more interesting final product. Alex's first submission for the music inspired us to amp up our efforts as the beautiful track deserved to be in an equally impressive game.

Despite our best efforts we cut the submission down to the wire and skipped over a lot of necessary testing. As a result, a number of minor issues made it into the submission that could easily have been fixed. Normally I would have been more rigorous about the testing of new features but we were feature complete about a day after we should have been. I have never been designing or scripting so frantically before. Normally we would cut features we don't have time for but with so little foundation in so little time every cut was a very hard choice and took away from the final product. Instead we really pressed ourselves to pump out a product and almost missed submitting!

Stressful and filled with mistakes but a wonderful experience. We actually had a finished product in 5 days. With one more day most all of those little missed bugs could be fixed but this was quite a lesson in the importance of testing and finishing early. In the end it was a great time and I am proud of the final product, bugs or otherwise. I'd love to take on something like this again in the future.
Download the Game Here
See my other projects