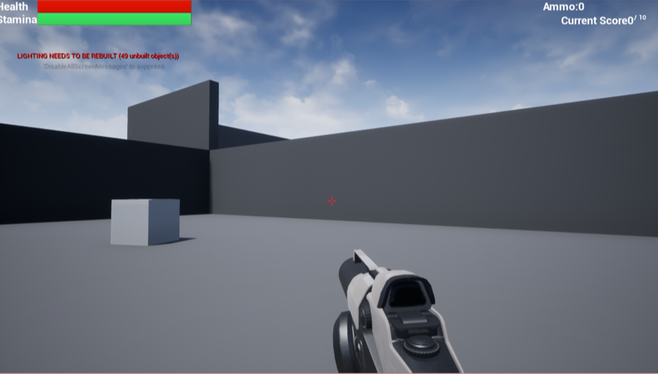 Setpiece Switch is something of a shell of a game. It is far detached from its original concept and has become more of a playground of features. To win the player must avoid an ai enemy that chases them around the starting zone, collecting 4 red blocks to place into a larger red "table" to unlock their way into a space with cones that give them ammo and a number of floating targets. They must climb around and shoot enough targets to earn ten points and then they win.

The original concept for this piece is far detached from its final form. A mix of an idea and a prompt, the tutorials our professor offered us to teach how unreal worked was creating a game with a carnival theme which he demanded that we add features to in order to make it our own. I decided to attach a feature from a horror game that was considered somewhat old and low visibility even back then called Craven Manor. In Craven Manor a player navigated a mansion by building onto it with miniature dioramas of different rooms that when added to the larger diorama of the mansion would become real and accessible. I wanted to use this same mechanic to create a surreal space full of puzzle challenges to be solved with different minor mechanics, both as a way to fit the theme and to test my ability with unreal by fitting a number of features into one project. Ultimately most of those goals were not met and the project became a playground of features instead. The concept never left my backlog however, I got to revisit the concept with Project Portal in my capstone year.

Aside from the experience with Unreal this project was a lesson in ambition. Too many goals and features tend to kill a project quickly. Much of the environment didn't reach the level of quality I wanted more because I had so little experience with 3d modelling but finding tutorials for features and creating using blueprints was a useful exercise. At the time I had about as much experience with Unreal as I had with Unity and being able to work with visual scripting let me exercise with computer logic with a lot less syntax. That said after working so long with written code I feel the gap is more bridged than widened. Syntax is just doing the same thing that the nodes in Unreal's blueprints were. I would very much like to return to Unreal in the future and the project itself was offered a second chance in my current Portal Project.

Unreal made for an interesting challenge primarily for my experience with it. My school used Github to move projects between in-class workspaces and personal ones so if I wanted to do any work on the project myself I had to try and move the project manually since unreal was not nearly compatible with Git the way unity was at the time. It seemed like every time I wanted to move the project I needed to copy the engine itself with the project. This piece was also something of practice with "smoke and mirrors" as it was taught to me in design class. I was able to fake a number of effects using simpler alternatives. Rather than trying to edit the model of an object during runtime, I switch it out to make it appear to be filled in, rather than actually pick up an object I delete the one on the ground and activate a model of the object that has been attached to my camera to make it appear to be carried. The new engine had me pushing my limits to find ways to accomplish effects in ways I could produce with my limited knowledge at the time.
See My Other Projects