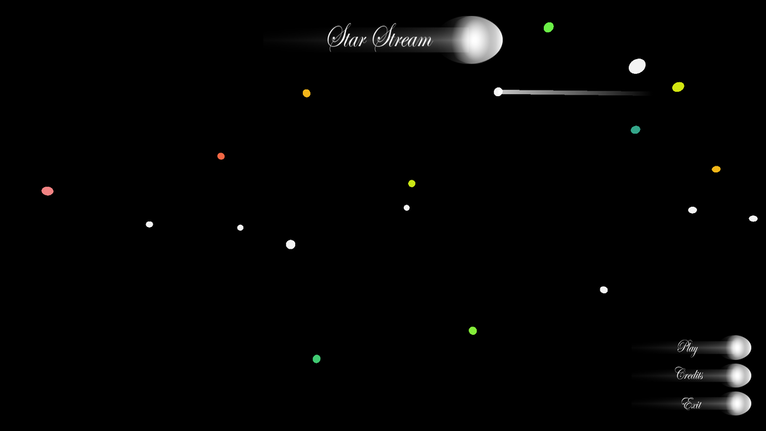 Star Stream is a one button game, the player is a shooting star drifting through a colorful sky avoiding red stars as they drift endlessly. There is only one input for this game, the player drifts between two lanes and left clicks to switch between them. There is no way to win this game, you simply drift until you cannot.

I had decided on a one button game concept around two semesters before this piece. I had tried getting into it with a group for another class but that resulted in a mildly underwhelming 2d project. While this version is not as feature rich it is a lot cleaner and the script on it looks most like my modern work. The return to this piece was from a suggestion from my professor to cull my scope and try making a clean product that looks finished. I think it turned out very well, especially compared to the pieces I had done up to this point. I don't think it is wildly impressive but it represents something of a milestone for me where my work focused more on being complete than being feature rich. 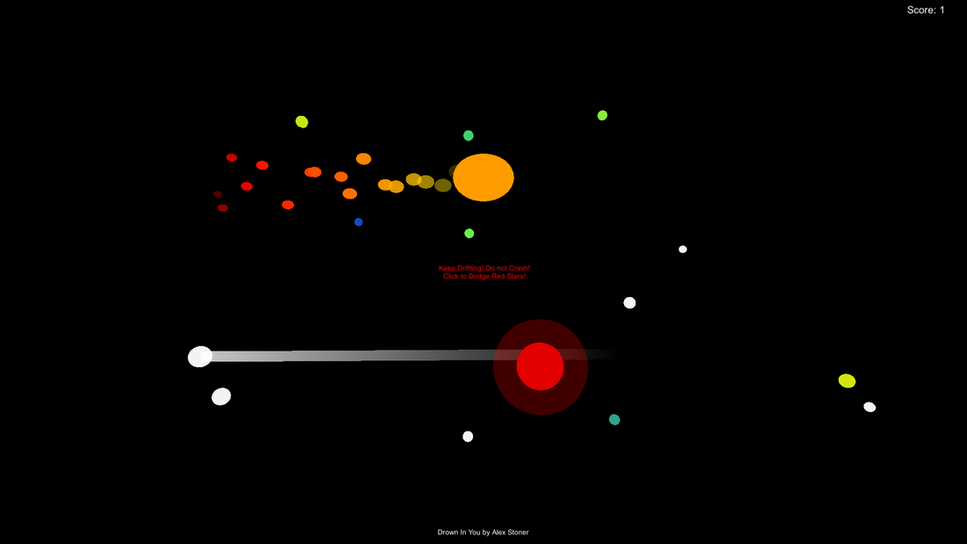 This piece allowed me to experiment with my methods more. I was able to play around a lot with the Particle Effects System, creating minor glowing effects that really popped against the black backdrop. This experience proved very useful for the Capstone Project that would arrive the following semester, editing explosive effects in that project was much easier after familiarizing myself with its features and what my tweaks would do. I was also able to experiment with Object Pooling as a means of creating multiple like obstacles without taking from the capacity of the computer. The obstacles are all created at once as soon as the game starts and reused whenever they reach a certain distance behind the player which should be offscreen.

As small as this piece was it was one of the first projects that I realized as fully as I intended from start to finish. There was a lot of feature culling in projects up to this point and it felt good to finally see something become everything I hoped for it even though it was made in a crunch around a few other finals. The object pooling practice became useful for future projects though I haven't published any that use it so far. I was also able to use some pretty basic music tracks to improve the experience drastically and practice using a music engine that loops through multiple songs with time. It was simple, yes, but then so was the project itself. It was an easy space to experiment with given the time frame I made it in and a piece that I am proud of despite its simplicity. If I had all the time in the world I would add a few minor feature changes to this piece but I doubt I will visit it again, it has served its purpose in so little a piece.
See My Other Projects